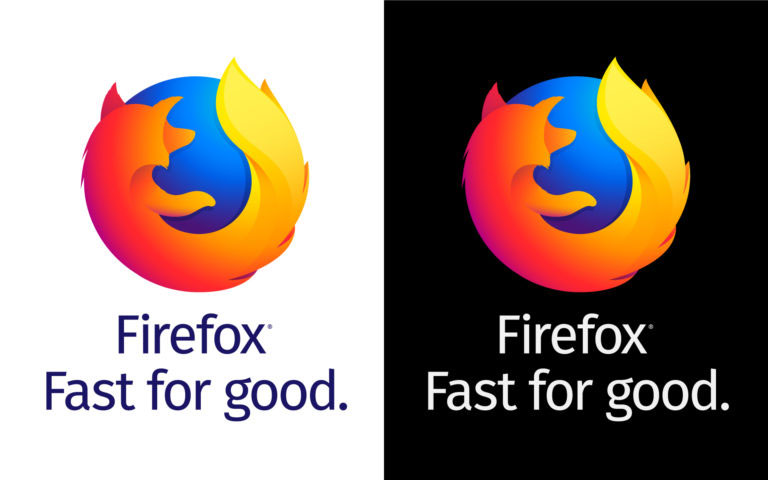 If you show people articles saying that Firefox is faster than Chrome, they'll believe it
The Register

Is Firefox faster than Chrome? Study finds people will think it is if articles say so
PC Gamer 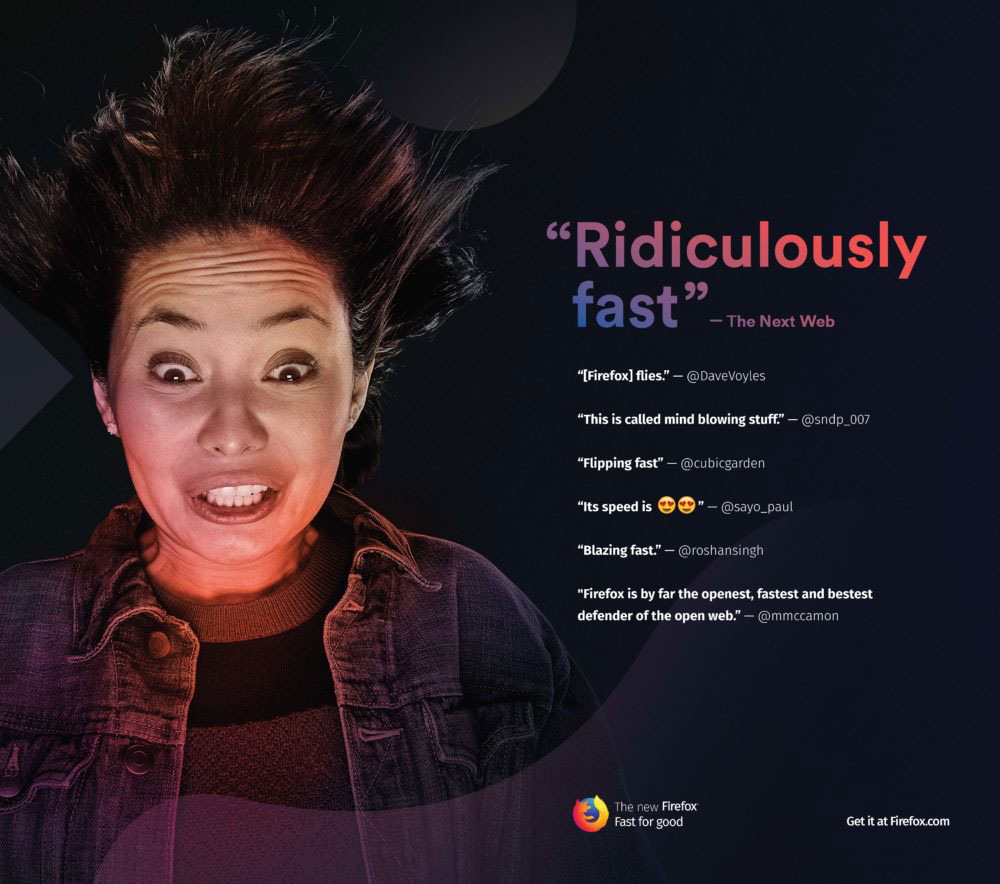 We used a between-subjects design and manipulated the article content (Self-Driving Cars, Firefox UI, Firefox Performance) and article source (USA Today, The Verge). Each participant experienced one of the six combinations of article content and source. A breakdown of our design and the number of participants in each branch can be seen in the table below. 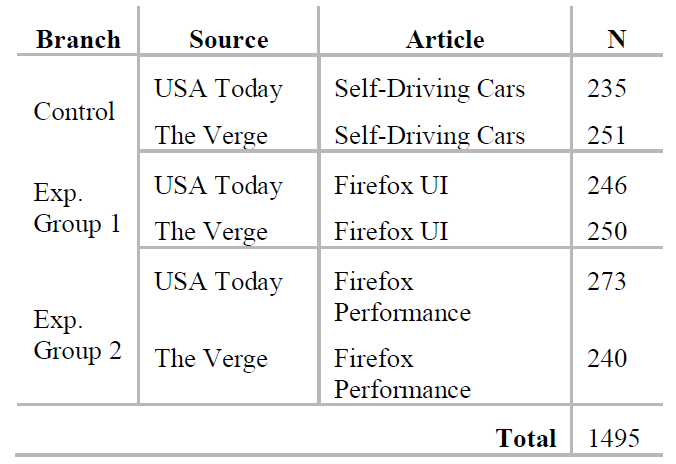 Participants answered questions about technological experience and behavior before reading one of the three articles from one of the two sources and rating its credibility. 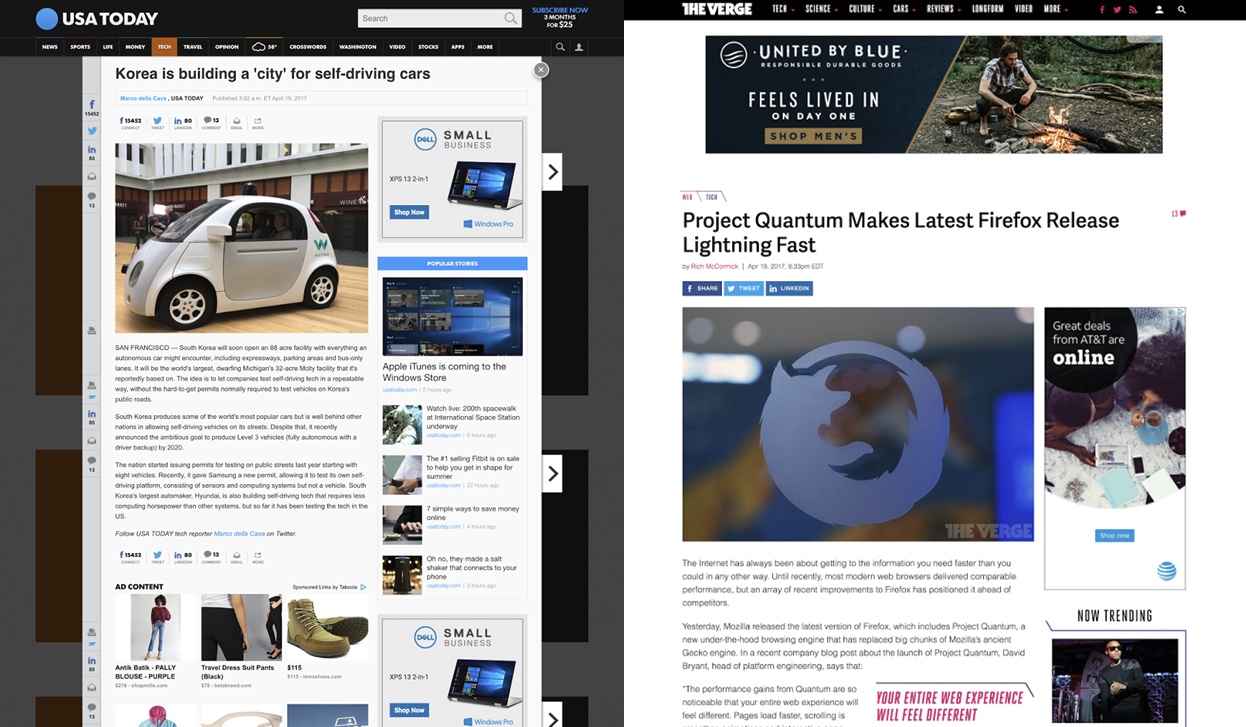 Each participant read one of 6 articles. Shown above are the USA Today x Self-Driving Cars (left) and The Verge x Firefox Performance (right) articles.
Next, participants gave feedback about the performance and design of two browsers, Google Chrome and Mozilla Firefox (questions about factors other than speed were asked to conceal the fact that perception of speed was our main concern).

Google Chrome is deemed fastest by default.
• Expected given Google’s prevalence in the advertising sector, coverage in the mainstream media and its primary marketing message that Chrome is “a faster browser”

Participants in the control condition who endorsed Chrome, Firefox, or Neither as faster
Reading an article about Mozilla Firefox makes Firefox seem faster.
• Engaging with the media to present software as high-performing is an important step in influencing users’ perceptions of that browser 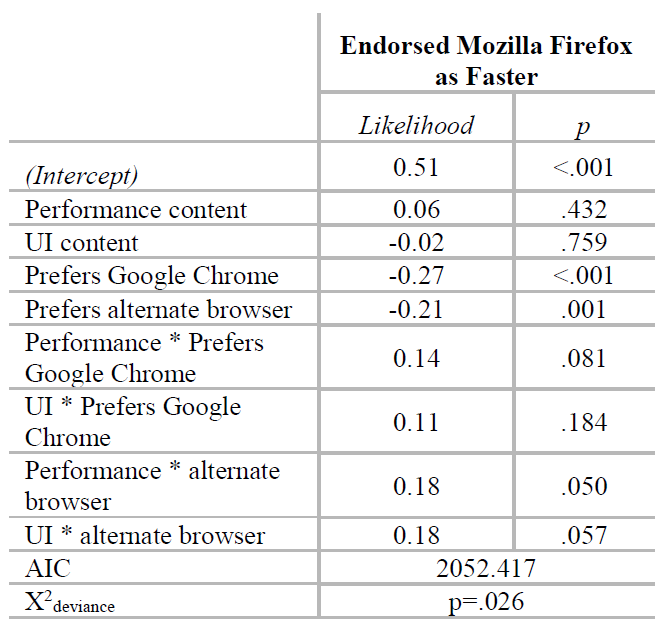 Model predicting endorsement of Firefox as faster with an interaction term for content treatment against browser preference
Reading an article about Mozilla Firefox performance makes Firefox faster than Chrome.
• Priming users about software’s performance is an integral piece of overall perceived performance that must be considered by developers, and it also presents a potential opportunity for smaller companies to compete with large companies that have an established brand

A sample of the messaging that is spread across all Firefox marketing materials, from the website to advertising campaigns

In demonstrating that reading priming messages about Mozilla Firefox can improve users’ perceived performance of Firefox over Google Chrome, we demonstrate a potential opportunity for smaller companies to compete against large companies with an established brand

Particular curated content is more effective than general agenda setting, as the message regarding performance improvements resulted in more endorsement of Firefox as faster than the message about UI updates